This page defines resin viscosity and explains its significance to composites processing. Typical values for various polymer matrices and everyday encountered fluids are provided. Finally, a brief introduction to viscosity measurement is provided.

In composites processing, viscosity is an indicator of how easily the resin matrix will mix with the reinforcement and how well it will stay in place during processing.

Resin viscosity is significant for:

The viscosity (\(\mu\)) of a fluid represents its resistance to deformation at a given rate, and in simplest form is:

Whereas the viscosity of a thermoplastic drops exponentially but monotonically with increasing temperature, thermoset resins behave in a more complex fashion. Initially, viscosity drops in the same manner as a thermoplastic, but once cure kicks off, the increasingly higher molecular weight and cross-linked polymer structure increases the viscosity rapidly, until gelation occurs, and viscosity becomes unmeasurably large. Past gelation, the material is no longer a fluid and should be treated as a viscoelastic solid.

The following table, reproduced from Hoa [1], shows some typical values of various polymer matrix materials, and other common fluids encountered in everyday life.

The viscosity of thermoplastics is orders of magnitude greater than the short monomers that make up thermosetting polymers prior to the thermoset curing process. Thermoplastics require elevated processing temperature in order to flow. Even heated, they still require substantial applied pressure to accommodate their relatively high viscosity.

Two of the above listed viscosity influencing factors can be controlled during processing through thermal management – control of temperature. The effects of temperature and its downstream linked degree of cure (DOC) are illustrated below for a thermoset resin system. 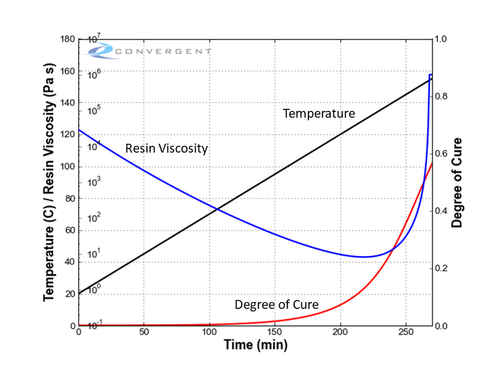 Example of resin viscosity behaviour against temperature and degree of cure (DOC) effects.

Viscosity relationship to temperature and degree of cure[edit | edit source]

The resin viscosity relationship to temperature and its degree of cure can be described using an empirical model for an Arrhenius-type equation shown below:

\(RT = \) Kinetic energy as a function of temperature

These two competing factors (temperature, and DOC – resin reaction) affecting resin viscosity must be balanced for setting the resin’s processing window. This is of particular importance in resin infusion process steps, where liquid resin must fully infuse the fibre preform – sometimes with flow lengths in the range of metres. Increasing temperature lowers the resin viscosity which aids in resin/fibre wetout. This is the fundamental motive behind the practice of performing heated resin infusion. However, in doing so, there is also an associated risk that the elevated temperature kicks off and accelerates the resin reaction. This can quickly become the dominating effect by rapidly and irreversibly increasing the resin viscosity. If the resin’s degree of cure progresses too quickly, this will quickly inhibit the resin’s ability to flow and ultimately reduce the time available for the resin to flow. Insufficient resin infusion may occur, and result in dry spots with a partially resin infused fibre preform.

Whether as resin fillers or matrix toughers, the addition of solid particles to a liquid resin results in a viscosity increase to the combined mix. At low particle concentrations, and for spherical particles greater than 1 \(\mu\)m in size, this relationship is described Einstein’s equation that can predict the effective resin viscosity of the mix.

The viscosity increase is more prevelent for higher particle concentrations and smaller particle sizes, where particle-to-particle interactions result in even greater viscosity increases than the relationship predicted by Einstein’s equation. This viscosity increase needs to be considered for infusion processes where high particle loading is desired, or when small particles such as nano-scale particle tougheners are intended to be added to the liquid resin.

The following knowledge base article by Anton Paar (equipment manufacturers of rheometers) discusses the influences of particles on suspension rheology [2].

While it is common practice to isolate and examine the viscosity of the resin matrix component on its own, it is important to consider the influence of the other composite constituent materials when the entire combined system of the matrix and the reinforcement materials are considered together as a whole viscous material.

When examining the composite material system as a whole, the addition of the reinforcement fibres has an enormous influence viscoelastic response of the material system. The fibres are able to resist shear deformation in proportion to the shear modulus of the fibre bed due to the waviness of the fibres, with this effect being higher for high volume fraction composites [3]. The fibre bed’s ability to absorb and dissipate the applied shear forces acts to essentially “thicken” the viscous behavioural response of the fibre/resin composite material. As a result, the effective viscosity of the composite material is much higher when compared to examining solely the resin viscosity on its own. 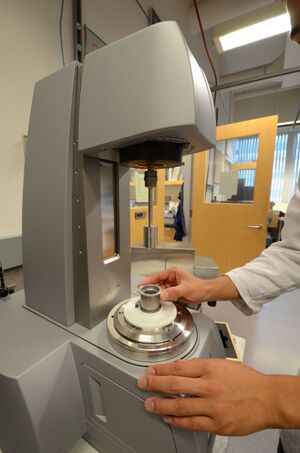 Resin viscosity is typically measured using a rheometer with parallel plate geometry, and disposable aluminum plates are used since the material cures to the plates. A rheometer is a specialized laboratory device that examines the response of a liquid, suspension, or soft viscous solid when subjected to applied forces. In particular, the method described here concerns the use of rotational shear type rheometers, examining a liquid’s response to shear forces. 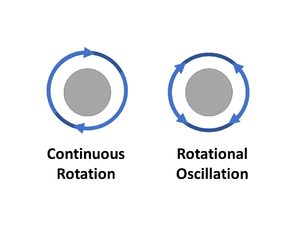 Rheometers can operate with either continuous rotation or rotational oscillation motion of the plate, cone, etc. setup. The information that can be obtained differs between the two motions, and each has its advantages and disadvantages. 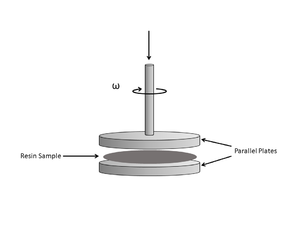 To approximate the resin’s gelation point, both rheometer motions can be used. However, for curing polymers, oscillating motion is generally considered preferable as it can measure and provide information past the gelation point until the sample becomes a solid [5].

To learn more about viscosity and viscosity measurement, the following rheology knowledge base document by Anton Paar (manufacturer of rheometer equipment) [4] is a good resource.

In composites processing, viscosity is an indicator of how easily the resin matrix will mix with the reinforcement and how well it will stay in place during processing. The lower the viscosity, the more easily resin flows. Resin viscosity ranges considerably across chemistries and formulations.

By scientific definition, viscosity is a measure of a material’s resistance to deformation. For liquids, it is in response to imposed shear stresses.

A class of polymer, some common examples include polypropylene and polyethylene.

They soften and melt upon heating (i.e. potentially recyclable), high viscosity when melted, therefore difficult to saturate fibres. Usually needs a lot of pressure and heat to process.

A central processing theme in the manufacturing cycle. This theme is concerned with managing the thermal response of materials during storage and handling or parts/tools when they are subsequently heated.

‘Preform’ is the term for the fibre reinforcement. This is the stage between the raw material form after it is processed into an architecture (fabric, mat, etc.) and becoming a composite.

With regards to manufacturing, risk is the combination of the probability and consequences of undesirable manufacturing outcomes. Manufacturing risk can lead to technical issues, program/schedule delays, and cost overruns.

The individual materials that combine to form the composite material. The constituent materials are separate and distinct on a macroscopic level.

Volume fraction of either matrix or fibres with respect to total composite volume (matrix + fibre).