Convective heat transfer, known as convection, is the heat transport mechanism associated with the flow of fluids acting as the carrier of thermal energy. It involves a combination of the sub-mechanisms of conduction and advection (bulk fluid motion). A classic physics example of convection is the heat transfer that occurs between a solid surface of a plate and fluid flowing over its surface. Locally, heat transfer occurs by conduction at the interface between the surface and the fluid, and away from the surface within the moving fluid [1]. Together, this combined process forms the convective heat transfer process [2].

Convection is the heat transfer mechanism between fluid (or gas) in contact with a solid surface. In composites processing, convection is an important heat transfer mechanism occurring in oven and autoclave processing methods. In these processes, heat is transferred between the hot gas environment to the composite part and tooling. This is also true for room temperature processing methods where convective heat transfer is taking place between the curing part/tool and the ambient air (gas) environment of the room.

Heat transfer by convection between a fluid and a solid surface is expressed by Newton’s law of cooling [3][2] (the same expression applies for heating):

The above expression is sometimes expressed as a heat rate – where surface area is explicitly part of the expression:

A key parameter in the above expressions is the convective heat transfer coefficient (HTC). The HTC depends on the fluid-flow conditions, thermophysical properties of the fluid, and flow path [2].

A further differentiation of convective heat transfer is made between two of the possible fluid flow conditions:

Forced convection implies a mechanically induced fluid flow and is the scenario encountered fluid motion is caused by external means such as fan, blower, pump or wind [2], causing an external pressure difference in the fluid [1]. As shown in the earlier table, forced convection results in a much higher convective heat transfer coefficient (HTC) value and improved heat transfer. Simply put, the forced fluid flow improves the heat transfer process between the fluid and the solid surface.

Examples of forced convection situations in composites processing are fan blown ovens (convection ovens) and autoclave heating equipment. The blown gas over the curing part is beneficial, improving the heating and cooling processes.

In natural or free convection, the fluid motion is purely from gravity and the natural fluid circulation due to the hot and cold fluid mixing. Fluid close to the heat source reduces in density and rises, and is subsequently replaced with surrounding colder and denser fluid. The resulting convective heat transfer coefficient (HTC) in natural convection scenarios is much lower than the HTC in forced convection. As a result, the heat transfer ability between the fluid and solid surface is reduced when compared to the mechanically induced forced convection scenario.

In composites processing, natural convection is encountered with an oven without a blown fan (natural convection oven), and room temperature curing where the gas motion of the ambient environment is occurring naturally.

The effects of fluid flow on convective heat transfer is shown in the example HTC ranges provided below for different gasflow conditions, representing natural convection and forced convection conditions (source: [2]).

While the above table of values show that a HTC as high as 250 W/m2·K can be obtained with forced convection gasflow (at 1 atm pressure), the expected HTC in composites processing are typically lower. This is discussed in the next section.

Convective heat transfer is dependent on any factor influencing the properties of the heat transfer fluid and its flow path. In composites processes using oven or autoclave curing where hot gas (air or nitrogen) is the fluid, these factors include:

The first of the 3 factors on the above list (gas velocity, gas pressure, gas temperature) are regulated by the heating equipment. Their influence on convective heat transfer will be briefly discussed here.

With the capability limits of the heating equipment, and the material manufacturer defined curing conditions for the matrix; the influencing factors of imposed gas velocity, pressure and temperature fall within a limited range for composites processing. As a result, HTC values under 200 W/m2·K are typically observed for autoclave processing, and a lower HTC is observed for oven processing. In the following figure, the effects of gas velocity, pressure, and temperature on the convective heat transfer coefficient (HTC) within the bounds that can be achieved in autoclave processing are shown. 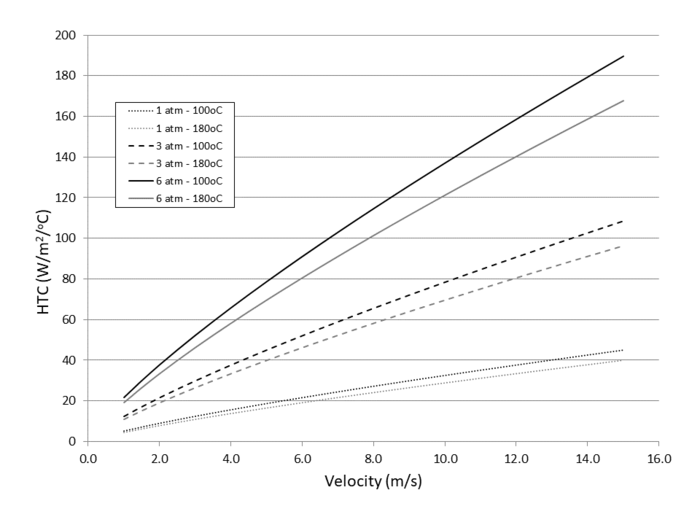 Correlation of the convective heat transfer coefficient (\(h\)) as a function of the average gas velocity for a fully turbulent flow over a flat plate (calculated for a characteristic flow length of 1 m). Source: [4] .

The curves at 1 atm pressure can be considered the behaviour obtained in a forced convection oven. While the applied pressure results of 3 atm and 6 atm represent the applied pressure that can provided by an autoclave. Depending on the applied process conditions in the autoclave, the convective heat transfer HTC varies, where it can range from as low as 10 W/m2·K to nearly as high as approaching 200 W/m2·K. At applied pressure conditions, a significant sensitivity to gas velocity is observed, where an increase in the gas velocity has a corresponding large influence on dramatically increasing the effective HTC.

As illustrated in the above example, the following effects can be summarized:

As summarized in the above table, some factors that can be imposed like pressure or gas velocity can improve the convective heat transfer, while other necessary factors like increasing temperature that required for matrix curing, decreases the convective heat transfer effect. For autoclave processing, a simple relationship was observed for turbulent gas flow by Johnston et al. [5].

Influence of tooling shape on airflow

Influence of part shape on airflow

The surface orientation and geometry of the tool-part assembly may play a significant role in blocking or redirecting gas flow in a convective heating environment. In turn, this may alter the boundary layer across the tool/part, thereby altering the laminar and turbulent flow regions, and thus the HTC. The impact the tool and part(s) have on flow are heavily dependent on the their placement within the heating environment. To learn more about how the tool/part may influence gas flow, click on the links above.

The tool-part assembly may block or redirect gas flow in a forced convection environment.