The polymerization process for thermoset resins is an exothermic reaction generating heat. Measured in energy/mass, the total heat of reaction represents this thermal energy released by a thermoset polymer during its curing process.

This page discusses the material property of the heat of reaction. The property definition, its usage in process modelling, and measurement are briefly discussed.

In composites processing of thermoset resin systems, the heat of reaction is an important parameter for cure kinetics modelling. It is involved in determining the resin's degree of cure, and the heat generation term of the thermal management heat equation.

The total heat of reaction is the measure of the exothermic heat release during the thermoset polymer curing reaction. Management of this heat release is important in ensuring a proper curing of the thermoset matrix, where large sudden temperature spikes (exotherms) are to be avoided as they can lead to the thermal degradation of the resin.

The polymerization process for thermoset resins is an exothermic reaction generating heat. Measured in energy/mass, the total heat of reaction \(H_R\) represents this thermal energy released by a thermoset polymer during its curing process.

As illustrated below, the total heat of reaction of the resin system is the area under a differential scanning calorimetry (DSC) obtained heat flow curve.

An example of a heat flow curve obtained from differential scanning calorimetry (DSC) measurement of a resin sample starting from an unreacted state. The total heat of reaction is the area under the heat flow curve.

In most composite processing literature, the term heat of reaction is used. However, it should be noted that the chemistry term for the energy released from an exothermic reaction process is enthalpy of reaction \(\Delta H\) or \(\Delta H_r\), and when normalized by mass - described as specific enthalpy.

In most composite processing related literature, the heat of reaction is represented as \(H_R\), \(H_r\), or \(H_T\).

The units of the heat of reaction are given in energy unit per mass.

The amount of exothermic energy released is polymerization and cross-linking reaction dependent. As a result, every unique thermoset resin system has the potential to release a certain and different amount of total energy. 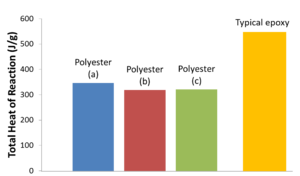 For popular composite thermoset matrix polymers such as polyesters and epoxies, typical total heat of reaction values range from 300-600 J/g.

The heat of reaction during polymerization is measured using Differential Scanning Calorimetry (DSC). The DSC measures the amount of heat energy released during reaction for a small resin sample. It is one of the common thermal tests performed to characterize a resin system and to determine the extent of resin cure in a sample. Sampling in the DSC requires only a small amount of sample, 10-30mg.

As illustrated earlier in the definition section, the total heat of reaction of the resin system is the area under the DSC obtained heat flow curve.

Polymerization of thermoset resins is an exothermic reaction and heat is generated during the curing process. A thermosetting resin has the potential to release a certain amount of energy while curing. This is called the total heat of reaction, HR, with a unit of J/g (SI units).

The heat of reaction during polymerization is measured using a Differential Scanning Calorimeter (DSC) equipment measuring much energy/heat comes out of the reaction for a small resin sample.

The use of multiphysics models to predict the outcome of real-world scenarios. May be analytical (closed form, "hand calculations") or computational (implementation on computers is required due to the large number of calculations involved. e.g. finite element method, finite difference method)

Most often in composite materials engineering, modelling refers to either:

A central processing theme in the manufacturing cycle. This theme is concerned with managing the thermal response of materials during storage and handling or parts/tools when they are subsequently heated.