For thermoset polymer resins (e.g. epoxies, polyesters), the degree of cure (DOC), \(x\), is a numerical representation of how far the chemical curing reaction (crosslinking process) has advanced. It is considered a processing state variable used to describe the current polymer material state based on its process cure history.

This page defines degree of cure and explains its significance in composites processing. Measurement and modelling methods are also briefly discussed.

Knowledge of the degree of cure is significant for ensuring that the intended and maximum mechanical properties of the polymer matrix is achieved. The higher the degree of cure, the higher the mechanical properties for the thermoset matrix. Conversely, under curing can lead to under-strength adhesion between fibre layers, or skins and cores, and potential geometric distortions upon part removal from the tool.

In the context of composite processing, the degree of cure is one of the key state variables as it can describe the physical state of the thermoset as it transitions from a flowing resin into a solid matrix material. The degree of cure value can provide insight as to whether the polymer is still a flowing resin, has become a gelled semi-solid, or become a physical solid with some insight into the potential mechanical strength of that solid.

For thermoset polymer resins (e.g. epoxies, polyesters), the degree of cure (DOC), \(x\), is a numerical representation of how far the chemical curing reaction (crosslinking process) has advanced. It is considered a processing state variable used to describe the current polymer material state based on its process cure history.

In the literature, degree of cure (DOC) is generally represented by one of the following symbols:

Degree of cure (DOC) is a unit-less index, and is represented as either a numerical fraction or percentage (%) value.

Degree of Cure development during the curing process[edit | edit source]

The degree of cure (DOC) is defined as a number between 0 and 1 (or 0% and 100%), where the latter is a fully cured resin. As the curing reaction and crosslink network formation progresses, the representative DOC value likewise increases. The figure below illustrates the progression of the DOC during a typical epoxy curing cycle as the epoxy crosslinking reaction progresses. The final DOC is directly tied to the thermal cure history experienced by the resin.

As an increasing number of chemical crosslinks are formed, the DOC value increases towards 1. The DOC does not have to reach 100% (or a value of 1) to for the thermoset to be solid and in a usable state. In practice, a thermoset resin such as epoxy is considered fully cured at a DOC around 0.9 or higher. However, the higher the DOC, the higher the mechanical properties for the thermoset.

In prepreg materials, the initial as-received DOC of the thermoset matrix is not 0, instead the resin is received in a partially cured state with a low DOC and the curing reaction is continued later after shape forming. 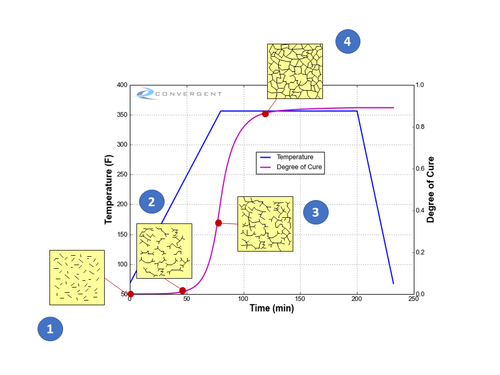 Example of the degree of cure development (crosslink network formation) during a typical thermal cure cycle.

Progression of the degree of cure (DOC) during the curing process, as indicated in the figure: 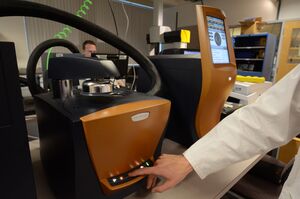 The curing reaction for thermoset polymers is exothermic in nature and generates heat. This allows the degree of cure (DOC) to be measured through differential scanning calorimetry (DSC) characterization of resin samples and is modelled as follows\[x=\frac{\int_{t0}^{t1} hdt}{H_R}\]

Visually, from a DSC characterization of the specific heat flow curve: 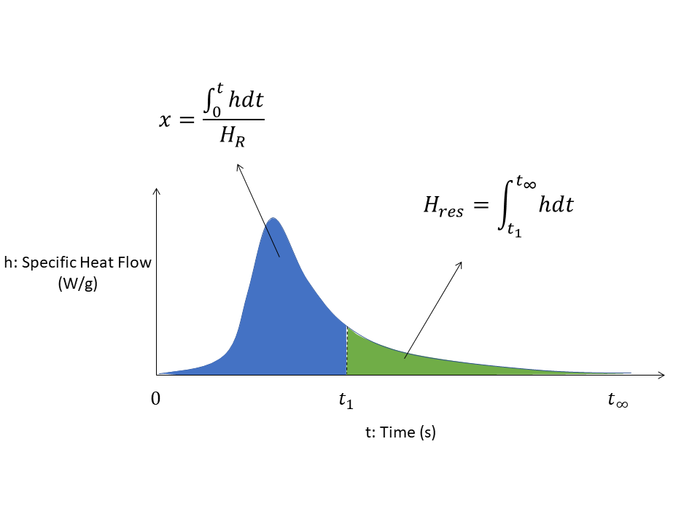 On the DSC curve, the DOC at time \(t_1\) is the proportion of heat measured up to that point in time, compared to the full DSC run of the sample to complete cure.

Alternatively, to determine the DOC from an existing sample, a small piece of material can be measured through the DSC. Here, the residual heat is measured (the remaining unreacted portion in the above DSC curve), and is compared to a full DSC run of an initial unreacted sample - the baseline for the full amount of potential heat release of the resin system. The DOC is determined by subtracting the amount of residual heat of reaction that is obtained (unreacted portion) against the total heat of reaction (total amount of reaction possible with full curing to completion).

Please see the following document on how to measure the degree of cure (DOC) as visually illustrated above, by differential scanning calorimetry (DSC) and other available means:

The glass transition temperature (Tg) of a thermoset polymer is directly dependent on the state of its degree of cure (DOC).

Using this relationship, the DOC can be determined through measurement of its glass transition temperature (Tg) using the DiBenedetto equation\[T_g=T_{g0}+\frac{\lambda x(T_{g\infty}-T_{g0})}{1-(1-\lambda)x}\]

The glass transition temperature (Tg) can be measured using a variety of methods. Common laboratory methods include differential scanning calorimetry (DSC), and dynamic mechanical analysis (DMA). Note that these methods do not necessarily give the same value.

The use of multiphysics models to predict the outcome of real-world scenarios. May be analytical (closed form, "hand calculations") or computational (implementation on computers is required due to the large number of calculations involved. e.g. finite element method, finite difference method)

Most often in composite materials engineering, modelling refers to either:

Pre-impregnated (prepreg) material refers to fibre that is already combined with resin. It is the most common material form used in aerospace.

During prepreg production, (e.g. fibres are run through a resin bath), prepreg is heated and partially cured to B Stage (< 5 % degree of cure). Thermoset prepregs (e.g. epoxy prepreg) have to be kept in a freezer at around -20 °C. At room temperature, the epoxy starts to cure.

Polymerization of thermoset resins is an exothermic reaction and heat is generated during the curing process. A thermosetting resin has the potential to release a certain amount of energy while curing. This is called the total heat of reaction, HR, with a unit of J/g (SI units).

The heat of reaction during polymerization is measured using a Differential Scanning Calorimeter (DSC) equipment measuring much energy/heat comes out of the reaction for a small resin sample.

The glass transition temperature (Tg) is the temperature region where the polymer transitions from a hard, glassy material to a soft, rubbery material. It is one of the most important properties of any amorphous polymer.