This page explains thermal conduction in the context of composites processing and how it differs from other heat transfer mechanisms such as convection. Specifics about the material properties involved in thermal conduction are given in separate pages.

Using the classic example of a metal rod being heated over a flame; the heat being transferred from the flame to the rod is considered to be by convection, while the heat transferred along the rod itself is by conduction [1]. Applying this analogy to the composites processing scenario for a laminate curing in an oven or autoclave environment; the hot air transfers heat by convection, while the heat transfer between the tool and laminate part, and within the laminate itself is by conduction.

There are two main properties to heat conduction:

Fourier’s Law provides an empirical description of conduction stating that the heat flux, q, travelling from a region of higher temperature to a region of lower temperature is equal to the product of the temperature gradient, ΔT, between the two regions and the thermal conductivity of the material, k. This means that the energy transport by conduction between two regions increases with the temperature difference between the two regions. A simple one-dimensional heat transfer case by solid-state conduction is shown with a wall exposed on one side to a hot fluid and to a cold fluid on the other side. Under steady state conditions a linear temperature gradient develops inside the wall as heat is transferred from the hot fluid through the solid wall to the cold fluid via conduction. 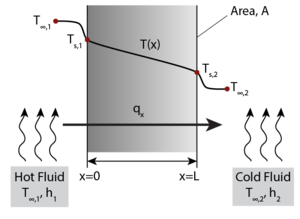 For a simple steady-state one-dimensional case, the differential form of Fourier's Law simplifies to:

Which, if the temperature distribution is linear, becomes:

In order to understand the 1D steady-state temperature distribution through a part, where one side side is hotter than the other, the differential form of qx must be substituted into the fundamental energy equation. Take the following example, where an infinitely long wall is heated from one side. 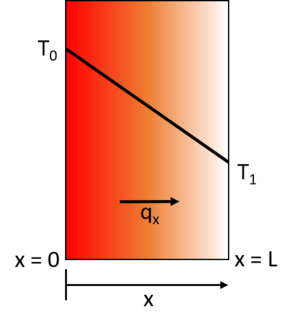 1D steady-state conduction heat transfer, where an infinitely long wall is heated from the left side.

For this case, the one-dimensional form of the energy equation, with no internal heat generation (\(\dot Q_{gen}\)) or accumulation (\(\dot Q_{cons}\)), i.e., steady state, becomes:

Integrating the above equation and solving for the boundary conditions (i.e. T(0) = T0 and T(L) = T1) yields:

Under steady-state conditions, the temperature profile increases linearly from T0 to T1.

Thermal diffusivities of some common materials used in composite manufacturing are given in the following table:

The earlier described steady-state example can be turned into a transient state conduction case by considering that the same wall is initially at a temperature T0. throughout, and then that at time t = 0 its right-hand wall is suddenly brought to the temperature T1. As time proceeds, the through-thickness temperature of the wall changes as heat flows in or out of the wall until eventually the linear steady-state distribution described in the previous section is achieved.

The rate of temperature change, and consequently the time to reach thermal equilibrium, therefore depends on the thermal diffusivity of the material.

For a composite laminate curing in an autoclave or oven, where the moving air is acting as a convective heat transfer boundary condition, graphical Heisler charts can be used to look up an approximate solution to the transient conductivity equation for the internal temperature profile of the laminate. Modern technology also allows an exact solution to be obtained using a number of available math or finite element software packages [2]. Alternatively, a simplified closed-form approximation developed by Rasekh et al. [3] can also be used. For more information regarding using this approximation, please see the paper by Rasekh et al. here.

Materials with large thermal diffusivity have a high thermal conductivity relative to their capacity to store energy (heat capacity) and will rapidly distribute the thermal energy throughout its volume and rapidly change temperature to reach the new equilibrium temperature.