Polymer materials have molecular structures with long chains comprised of small repeating units. The origin of the word polymer comes from the Greek words poly (many) and meros (part) [1]. Many engineering polymer materials are organic compounds chemically based on carbon, hydrogen, and other non-metallic compounds. Polymers are characteristically low in density and flexible compared to the other material classes [2].

For polymer matrix composites (PMC), both thermoset or thermoset polymers can be used as the matrix. The choice of matrix polymer material determines both the composite’s environmental resistance and maximum service temperature.

Polymers are comprised of long molecules that are made up of smaller repeating units (also known as a "mer") joined together end to end. Illustrated below is the simple example of polyethylene (PE), with its repeating molecular structure. 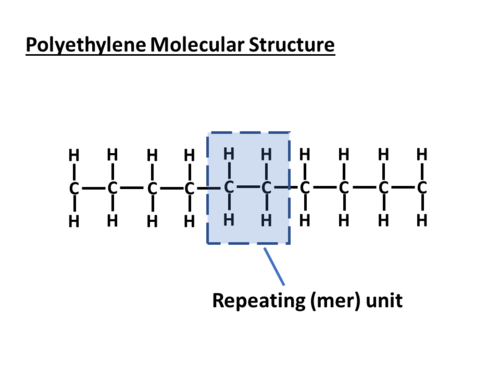 The mechanical properties exhibited by the polymer are dependent on two molecular factors: 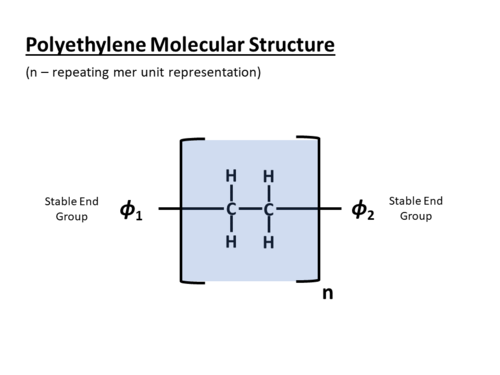 As the number of repeating units (n) increases, both the physical polymer chain length and the corresponding molecular weight of the polymer increases. 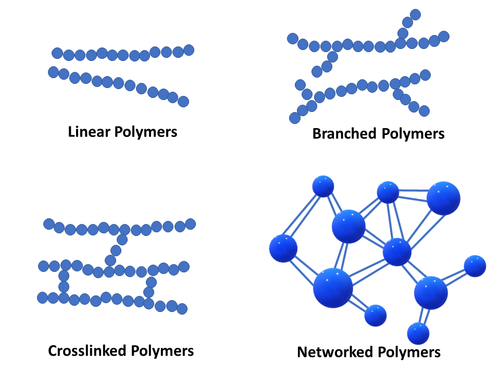 Linear polymers consist of long chain-like structures where repeating units are joined together end to end. The long linear chains are flexible, where van der Waals and hydrogen bonding may occur between polymer chains while in close proximity – leading to chain entanglement.

Branched polymers feature short side branched chains that are connected to the main (longer) polymer chains. The packing efficiency of the polymer with side branching is reduced, lowering the polymer density.

The linear polymer chains of crosslinked polymers are joined together via covalent bonding of smaller molecules acting as bridges between them. The crosslinking process often takes place through a non-reversible chemical reaction process (curing). Crosslink formation characterizes thermoset polymers. 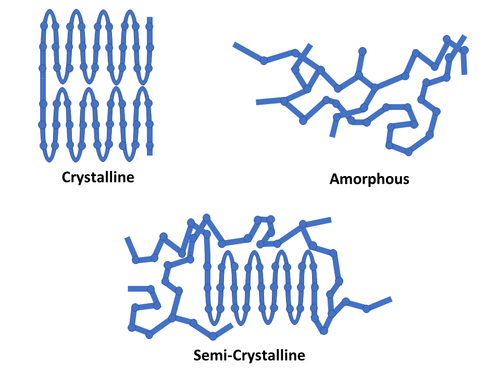 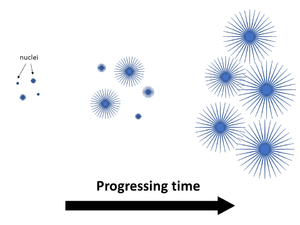 Illustration of spherulite crystal structures and their growth with time when cooled below the polymer melting temperature (Tm).

Thermoset polymers are generally amorphous in microstructure – a consequence of the lack of chain mobility that results from crosslinking. The polymer chains do not have the physical ability to re-organize into packed and folded molecular chain structures.

Thermoplastic polymers on the other hand typically exhibit a combination of both amorphous and crystalline regions, forming a semi-crystalline microstructure. The crystalline structures often take the form of spherulites – which form in a polymer that is cooled from its melted molten state back to a solid.

Initially starting as nuclei appearing in a super cooled polymer melt (below melting temperature Tm), the spherulite structures grow outward in the radius direction with progressing time. Spherulite growth is actually the growth of many smaller crystals forming the larger structure [1]. As the spherulites grow, polymer becomes trapped between these structures – the amorphous polymer regions.

Thermoset or thermosetting polymers are characterized by the molecular crosslink network of covalent bonds that are formed between adjacent primary polymer chains. Thermosets undergo polymerization and crosslinking during a curing stage with the aid of a hardening agent and heating or promoter.

During curing, they change from viscous fluid to rubbery gel (viscoelastic material) and finally glassy solid. If heated after curing, initially they become soft and rubbery at high temperatures. If further heated, they do not melt but decompose (burn). Thermoset polymers effectively become irreversibly hardened after curing and cannot be reprocessed, making them single use and not recyclable.

Popular examples of thermoset polymers include epoxy and polyester.

A class of polymer that is characterized to have the ability to flow when heated. Typically linear or branched in structure, upon heating, thermoplastics soften and melt where they flow in a manner of a viscous liquid. This process is repeatable upon repeated heating and cooling, making them potentially recyclable.

The high viscosity of thermoplastics when melted, make it difficult to saturate fibers in the composite manufacturing process. A lot of pressure and heat are required to process.

Some common examples of popular thermoplastics include polypropylene and polyethylene.

A portion of the molecular polymer chains tend to ‘fold up’ into densely packed regions called crystals.

In composites processing, viscosity is an indicator of how easily the resin matrix will mix with the reinforcement and how well it will stay in place during processing. The lower the viscosity, the more easily resin flows. Resin viscosity ranges considerably across chemistries and formulations.

By scientific definition, viscosity is a measure of a material’s resistance to deformation. For liquids, it is in response to imposed shear stresses.